INTEGRITY FTC in College Station, Texas is a service company offering education and training to the community. Integrity FTC specializes in Armed Defense Training, and Active Shooter Event Training and Consulting, for organizations and individuals. We are Texas State certified to teach Texas School Safety and Texas License to Carry. Our clients have been schools, churches, businesses, organizations, small groups, families, and individuals, civilians, and professionals.

INTEGRITY FTC offers small classes and quality firearm instruction for all skill levels. We have trained students from diverse cultures, backgrounds, ages and occupations. Many of our students have been active or former military and security professionals. We have trained fathers with their daughters, fathers with their sons, mothers with daughters and even entire families. We often teach classes to adults who have never fired a handgun or rifle before. The INTEGRITY FTC method of training delivers success.

MILITARY EXPERIENCE: George was a U.S. Army Contract cadet at Texas A&M University and in the Corps of Cadets and intended to pursue an Army career. While attending ROTC officer Advanced Camp in Fort Riley, Kansas he was medically disqualified from the program and the Army for having a history of Asthma as a small child. (George had never experienced asthma symptoms as a cadet and has been perfectly healthy and athletic to present day, so this news especially sucked). He still loves his country and would serve this very day if called upon.

George was on the Rudder’s Ranger Team, the Army ROTC’s elite training unit for proficiency in light infantry tactics and earned the coveted Rudder’s Ranger Pin. George competed in all four years of JROTC in rifle shooting, winning regional awards in championship competition.

PERSONAL:
George is a Christian and loves God, his family, and his church home and community. He has a genuine concern and investment in his students and his passion is teaching. He focuses on the mechanics and the mindset of the shooter. He believes that no one should derive their identity from the word “victim”, and no one should live in fear. He believes in firmly establishing the basics of true marksmanship, correcting bad habits, preventing new ones, practicing with intention, and learning consistency through muscle memory.

George is an Aggie, class of ’86 and also holds a Masters Degree from Texas A&M, in ’04.  George credits his camping, outdoor, and survival skills to 10 years of service as a Boy Scout Leader. He has served in EVERY scout leader position ending as Scoutmaster.

PERSONAL: Carl now works as an Associate Director for Information Technology at Texas A&M and continues to serve as an instructor and leadership coach for the Texas A&M Corps of Cadets. Carl has a passion for teaching and coaching, loves the outdoors, and spends his time mentoring others and supporting shooting programs. He is a certified Whiskey Sommelier, and member of the Brazos Valley Friends of the NRA Committee. As a single parent, Carl’s most proud of his 2 sons – if the weather’s nice, you’ll find him riding his Harley.

MILITARY EXPERIENCE: Steve is a retired U.S Marine Corps Gunnery Sergeant with 20 years of service. He was deployed to Iraq from the 5th Marine regiment, Camp Pendleton. Participated in Operations Northern Watch and the Kosovo Campaign. Served as the Detachment Commander, U.S. Embassy Algiers, Algeria. Served as a Drill Instructor, Senior Drill Instructor, and Regimental Training Chief for the MCRD San Diego. Served as a Sergeant Instructor, Platoon Sergeant, and Platform Instructor for OCS, Quantico, VA.

PERSONAL: Gunnery Sergeant Cheatham is currently working for Texas A&M University as Cadet Training Officer for the Corps of Cadets.

MILITARY EXPERIENCE: Russ is a retired U.S. Navy Senior Chief (E-8) with 20 years of service, 15 of them as a military police officer, completing nine deployments, two of them to Iraq with others to Bahrain, Kuwait, United Arab Emirates and other locations in the Middle East and Mediterranean.  He has been instructing Navy military police and foreign military on weapons since 2005.  He also trained four platoons of Iraqi Marines on marksmanship and tactics in Basra, Iraq in 2005.  In 2006 he certified as a Squad Designated Marksman Instructor with the U.S. Army Marksmanship Unit in 2006, allowing him to setup the first Designated Marksman program in the Navy’s new Mobile Expeditionary Security Detachments.  Russ was selected to serve on the All-Navy Marksmanship Rifle Team for three of his non-deployed years, earning an Excellence-in-Competition medal for service rifle competition while competing in Inter-Service Matches.  Among his titles in positions at different locations both stateside and overseas are Lead Criminal Investigator, Chief of Police, Antiterrorism Officer, Operations Chief.   His military certifications include:

PERSONAL: Russ works his primary position as the Director of Security & Safety at the Texas A&M Hotel and Conference Center.  He is active with the Brazos Valley chapter of the Combat Veterans Motorcycle Association and is a half-time student at Texas A&M University.  He has been married for 20 years and has two teenage daughters in the A&M Consolidated HS system where his wife works. 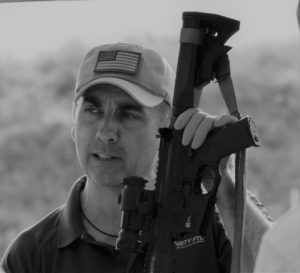 George Clendenin is the Owner and Chief Instructor for Integrity FTC.

I do not take the word Integrity lightly. When Integrity is used in the bible it is translated as simplicity, soundness, completeness, upright, and perfection.  It is used to describe sincerity, truth, and a pure heart.  Although, we will never achieve perfection, and we often fail, it does not change our heart and our attitude to continue to strive and work for this maturity.

One of my favorite authors describes a similar concept as a ‘ministry of competence’.  I like that. I feel sometimes that our country has lost its way in this area. I do not like that. This is what I believe as a professional gifted to serve in this area:

If you are called to defend your life or the life of a loved one, if you are called to serve your country through a national, state or local government capacity, if you plan to pick up that handgun, hunting rifle or shotgun from your house or that rifle in the field of battle, then you need to have already achieved soundness, completeness, and perfection in your training of your body and your mind. You need to have already decided you will win this fight and you will survive!

I believe that ultimately our protection is from our God and He wonderfully and mysteriously has called us to walk in integrity.”
GAC

Psalm 91:1,5
1 He who dwells in the shelter of the Most High
Will abide in the shadow of the Almighty.
5 You will not be afraid of the terror by night,
Or of the arrow that flies by day;